If you are trialling the use of a grease or oil in a prototype device then you will appreciate how crucial lubricants can be; extending the functional life of components, improving the tactile feel of customer operated controls…the reasons to include a lubricant are many and well worthwhile.

Before you move from prototype to production, consideration must be given to grease compatibility issues. Does the lubricant come into contact with any rubbers or plastics? It is true that some lubricants (both mineral and synthetic based) can cause plastics and elastomers to swell or crack over time. The swelling, cracking and even discolouration are not instant and can take many hours of exposure to the grease for the damage to occur. Care must be taken by designers to not specify materials that are incompatible in the design of a new product.

What makes the plastics/rubbers swell or crack? It is important to note that is not just the oil (or base oil if using a grease) that can cause problems; generally it is the oil that is the focus of problems but the additives of a grease/oil can also be a issue. Some base oils used to make a grease can be considered ‘plastic safe’ but the additives included in the formula could also cause a problem….so be careful not to just look at the base chemistry of a lubricant, leading to a false sense of confidence.

Plastic and elastomer types are many and varied so there is no quick answer to this issue. There are some general guidelines that you should follow when considering a base oil for use with plastics or elastomers. Perfluoropolyethers (PFPE) and silicones are compatible with most plastics. Synthetic hydrocarbons (includes polyalphaolefin – PAO) can generally be used with plastics but not with elastomers; esters should be used with extreme caution with polycarbonate, polyester, polyphenylene oxide, polystyrene, polysulfone, polyvinyl chloride, Buna S, Butyl, natural rubber and neoprene. Ultimately though, the only way to ensure compatibility is through rigorous testing under high stress, high temperature and poor plastic/elastomer conditions.

The accompanying reference chart below rates the compatibility of synthetic base oils with some common plastics and elastomers (plus a table about solvent and base oil compatibility), servicing as a general guide. Note that the below table is only a general guide and does not account for thickeners and additives that can be included in a grease and as you will read shortly, only a compatibility test can determine if there is a compatibility issue with the materials. Regardless of the guidance provided on general compatibility charts, we would always recommend that customers undertake a compatibility test for the plastics/rubber and lubricant in question. Compatibility testing is generally carried out at high temperatures, simulating an accelerated life and poor or stressful conditions for the plastic and elastomer/rubber. A relatively simple test, the criteria of the test varies depending on which grease manufacturer you are dealing with. A run through the test:

It should be noted that there is nearly always a marginal amount of change in weight and dimensions when parts are exposed to the heat and/or lubricants; a small amount of change is considered the norm and is not an indication there is a serious compatibility issue, however only the customer can decide if any change will impact on the performance of the prototype part/device. Some lubricants can cause plastics and rubbers to change colour, this is generally considered an aesthetic issue but can be relevant if the part is able to be seen by customers/users.

If you do not have access to a testing facility, it is possible to carry out your own test. Although not as thorough as the above process, a good indicator of any possible lubricant and plastic compatibility issues could be shown by conducting your own test at ambient/room temperature; simply immerse a piece of the plastic/rubber in the appropriate oil or grease and leave in your office/workspace for an extended period of time. Remember to weigh and measure the parts before and after the test.

Maybe you have have been told that the lubricant you are considering is ‘plastic safe’…. We would always recommend that a device manufacturer carries out a compatibility test, even if advised that a lubricant will have not problems with their plastic or rubber, why? Much of the raw materials for the plastic that is used in production is sourced far and wide; consider a scenario where you are producing a device in large volumes or for many years, the material in your device exhibits no compatibility problems with a grease used inside but three years later there becomes a problem. Arranging for a compatibility report for the grease and plastic used in your device at ‘day one’ ensures that you know something has changed….be that your plastics supplier has started sourcing raw material from a different source without notifying you or your grease supplier has changed the formula of the lubricant without informing you. A reputable lubricant manufacturer would NEVER change the formulation of a lubricant and keep the original product name without telling customers.

So carrying out a compatibility test at day one of a project is a ‘belt and braces’ exercise to protect a you/the customer from problems in the future, in terms of blame and/or liability.

We are creating a series of articles giving a basic introduction to the different base oils that we use, which could be of interest to the reader. 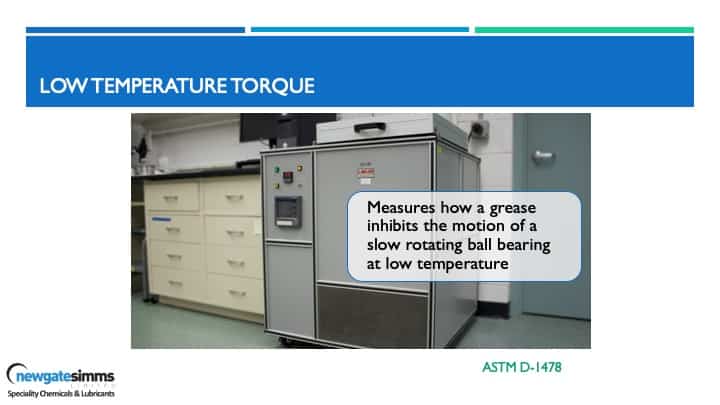 The grease low temperature torque test measures how a grease inhibits the motion of a slow rotating ball bearing at a low temperature: Test is run below -20°C at 1 RPM. Starting torque and running torque is recorded after 60 minutes. Very useful data point for selecting a grease for… 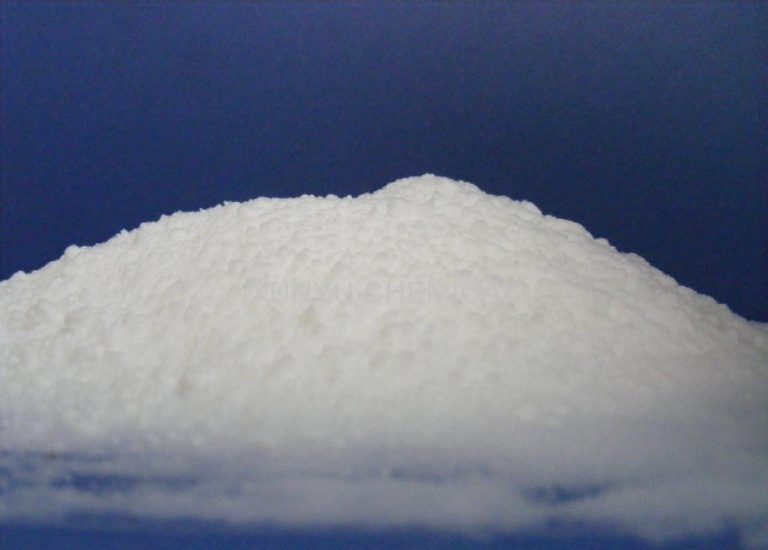 We use two types of silica as a thickener in our grease range, both fumed silica and hydrophobic silica. Silica is not to be confused with silicon or silicone. Fumed silica is hydrophilic (water-loving) and has a thixotropic behaviour due to it’s time dependent recovery of apparent viscosity after shear… 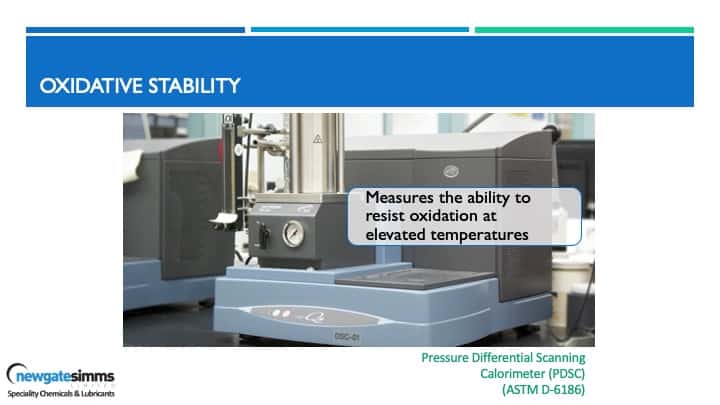 The Oxidative Stability test (ASTM D-6186) measures the ability of a lubricant to resist oxidation at elevated temperatures. The test can be conducted on an oil or grease. Typically reported in ‘minutes’ – The greater the time to exotherm, the better the oxidative stability of the lubricant. Test conditions are… 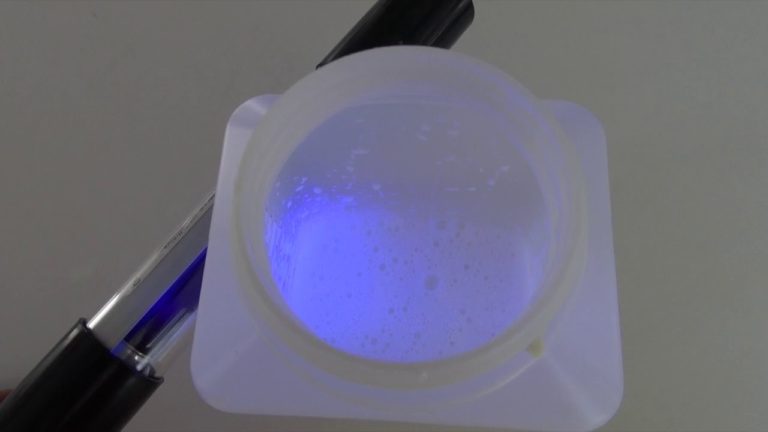 It is possible to add a UV dye/tracer to most of the LIP Antifriction Coating range. This UV dye is a way to help with production quality assurance so parts can be inspected and checked for the presence/application of an LIP anti friction coating product. The reader should consider that… 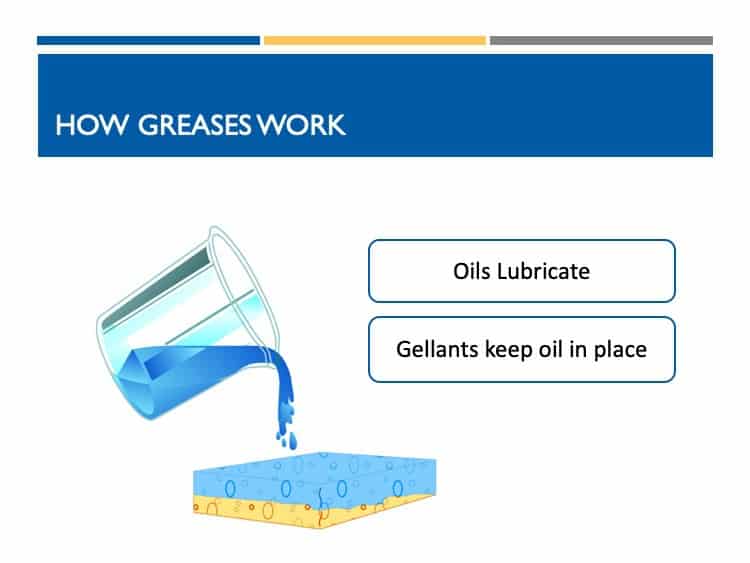 Why should you choose a grease rather than an oil, if you have the choice? There are some simple or practical reasons and some more chemical advantages. First and foremost, a grease will ‘stay in place’. How good a grease is at staying where it has been applied is down… 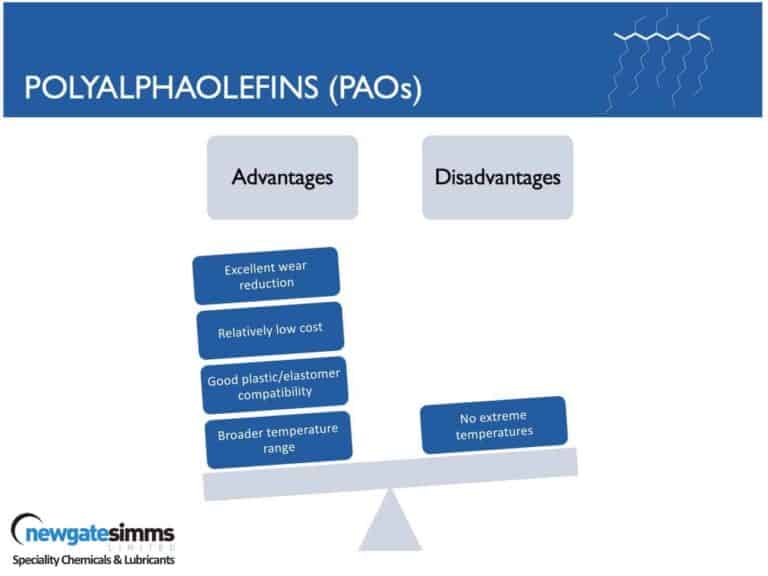 Polyalphaolefin (PAO) oils are stable, lubricious fluids that are compatible with most plastics and elastomers. PAO oils are considered a great replacement for petroleum based products, are used in countless applications and industry sectors. PAO summary: Temperature range of -60 to 125°C Relatively low cost Excellent wear reduction Good plastic/elastomer…