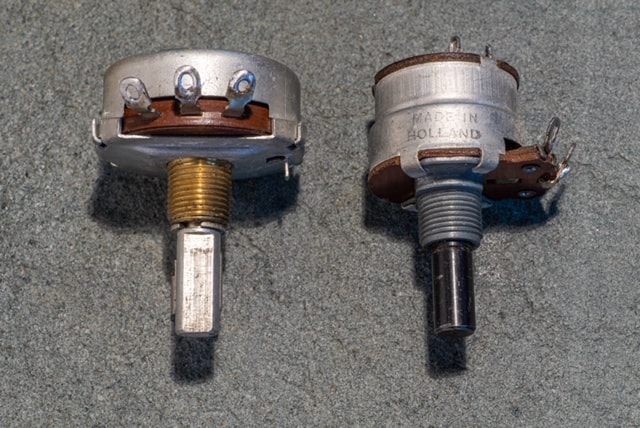 Two ageing potentiometers had developed electrical contact noise which was impacting on the usability of the equipment in which they serve. Both potentiometers required cleaning and restoring to full operation so they could be returned to service. Components will perform satisfactorily and continue to operate for many more years of service by paying particular attention to the lubrication of the potentiometer wipers so that wear is significantly reduced following from cleaning operations that, by their very nature, remove any existing lubrication. The goal was to determine the optimal lubricant that satisfies the requirements of material compatibility, wiper velocity, grease migration and electrical contact performance.

By paying particular attention to the lubrication of potentiometer wipers, components will operate for many more years.

The following text, application detail, test data and images was provided by Inventors Emporium for which we are very grateful they gave us permission to publish their project findings:

These vital electronic components provide a variable resistance within a circuit so that its behaviour can be changed easily and continuously. The word potentiometer derives from the variable voltage potential that this component can provide in an electrical or electronic circuit.

They consist of a circular or straight track of a resistive material, terminated at each end and a moving contact known as a wiper that moves along the track to set the resistance presented to the external circuit relative to the fixed connections.

This combination of electronic and mechanical elements throws up unique challenges when it comes to servicing, with choices having to be made regarding cleaning agents and processes and also for lubrication to minimise wear, protect against future contamination and preserve the correct mechanical feel of the control.

As part of our R&D activities, we also maintain our own test gear and assist others in the repair and maintenance of their equipment. We try at all times to respect the nature of the equipment we are working on while still making upgrades to safety features where necessary.

A common fault develops in older equipment whereby potentiometers (variable resistors) used to control various parameters in the unit, cause a jitter in the signal, both when being operated and when static. This noise can manifest as crackling in audio circuits, or instability in settings for any parameter.

For this project, two potentiometers were selected from a piece of quality test gear from the mid-80s which had become so electrically noisy that the use of the equipment had become problematic. The usual causes of this noise are the accumulation of contaminants between the wiper and the resistive track of the potentiometer and oxidation of, or deposition of, volatiles on the metallic contacts of the wiper and slip rings.

Some potentiometers have openings that allow dust and volatiles to enter and gradually degrade the performance of the part. Others are more resistant and both types are represented in this test.

Extensive research into cleaning and lubrication methods found a large number of disparate techniques which were poorly supported by any measurements and no long-term follow up studies to demonstrate that performance had been maintained without degrading the materials of the components.

Lubrication of potentiometers is clearly evident in some models while others have no visible traces. However, after cleaning with various compatible solvents, it is clear that the feel and the sound of all potentiometers as they are operated have changed, suggesting that the contact surfaces are dry and therefore potentially causing excessive wear.

The challenge is to find lubricants with the correct characteristics and compatibility that can be applied after cleaning and grant the restored potentiometers a long and useful life. This is critical because replacement parts are likely to be very hard or impossible to trace and the first duty of those engaged in this work is to do no harm.

Using an oscilloscope, the two potentiometers were operated while observing the voltage at the wiper during its excursions from 0V to a test voltage between 5-7V.

The oscillograms below clearly show what was evident in service, i.e. intermittent contact of the wiper with the resistive track and with the slip ring. The trace should show a smooth line, without disturbances, indicating that the resistance is changing continuously. The fine vertical extensions to the trace reveal where the moving contact of the potentiometer has briefly lost contact with the resistive track – always an undesirable behaviour.

Potentiometer A is a 200kΩ linear component which is fairly well enclosed and shows moderate noise across its travel but particularly at one end of the track. Operation still feels light and mostly smooth. Potentiometer B is a 10kΩ Log taper component with a single-pole, single-throw mains-rated switch and shows very bad noise across the entire travel. The logarithmic response curve is nicely displayed. Operation is smooth but heavy. A large opening exists in the housing which is likely to have admitted contaminants over the years. The numerous vertical extensions to the trace below show that the moving contact is losing its connection with the resistive trace for substantial periods, which will badly disrupt the operation of the circuit which it controls. This was very evident in the equipment from which this component was taken and which triggered the maintenance operation.

The two components were dismantled so that the condition could be assessed and cleaning be performed. Potentiometer A shows little visible contamination but some small deposits of black powder, likely from the small carbon wipers, evident at the ends of each track. The inner slip ring looks to be slightly oxidised.

Potentiometer B shows clear signs of contamination and deposits, with the switch particularly showing heavy oxidation. Contacts are dull, especially the small parts that constitute the switch element. Clearly, good electrical contacts cannot be achieved with surfaces in this condition.

In both cases, the resistive tracks look to be in good condition.

The potentiometers were cleaned in two stages, first with a light solvent and then a solvent wash, using only a light mechanical assistance of a soft brush for the metallic contacts alone. Resistive tracks are durable but the surface finish is important, so no operation that might score or mar the surface should be used. Cotton buds can be used if the contamination is heavy but they were not needed on this occasion.

The shafts and bores were cleaned with Isopropyl Alcohol and while Potentiometer A had no visible lubrication, Potentiometer B had the remains of a thick and sticky substance (almost certainly the remains of the original grease) that was clearly causing the heavy feel.

The results of the cleaning operation can be seen in the image below. Contacts are now bright and the tracks free of contamination and old greases. It was determined that two products were suitable for the different usage cases represented by these components. Potentiometer A is operated frequently and rotated rapidly, whereas Potentiometer B is only operated at the beginning and end of a session with infrequent adjustments. The high temperature capabilities of the Rheotemp 763G grease will not be tested in the equipment from which this potentiometer was taken but still underlines confidence that operation at 40-50°C will remain consistent for many years of operation.

Using a cleaned soft brush with synthetic bristles, the new lubricants were applied in small quantities to each potentiometer in turn, taking care not to spread the greases outside the track.

Here is the Rheolube 716A grease after application to Potentiometer A: The wiper has cleared a path through the grease but has not caused it to extend any significant distance away from the area where it was applied.

Here is the Rheolube 763G grease after application to Potentiometer B’s track and switch contacts: Rheolube 716A was used on the shafts of both parts.

After grease application, each potentiometer was then operated 10 times to spread the grease evenly over the operating area. Both greases kept well within the chosen area with little build up on the wipers.

The greases will prevent contaminants reaching the surface of the track and volatiles being deposited on the metallic contacts of the wipers. This is especially important for Potentiometer B which has the more open construction and will again be exposed to contamination when in service.

The potentiometers were then reassembled and retested and all traces of contact noise were eliminated as shown below. The feel of Potentiometer A was slightly improved and fast actuation of the shaft did not result in loss of contact as shown in a further test which operates the potentiometer rapidly from stop to stop: Expanding the horizontal scale shows no signs of contact lift at these high rates of rotation: Potentiometer B shows clearly the improvements in electrical performance as a result of the cleaning operations and the feel was transformed by use of the Rheolube 716A into the light and smooth characteristic of a new part.

Potentiometers are very durable components and if they are cleaned sensitively and lubricated with the correct greases, their performance can be sustained over decades.

These two components can now be returned to service in the knowledge that these specialist greases will protect them from wear and contamination to serve reliably for many years, maintaining the equipment utility and value.

This investigation ably demonstrates the central role of lubrication in these critical mechanical and electrical components, something often overlooked during servicing.

*All oils and grease have at least a small potential to cause compatibility problems with plastics and rubbers. The chemistry used in the ester based Rheolube 716A does have a higher risk of causing compatibility problems, for more information, we recommend you read our article about Lubricant & Plastic/Rubber Compatibility.

Thanks again to Inventors Emporium for agreeing to let us publish their project findings. 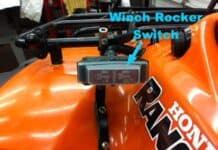 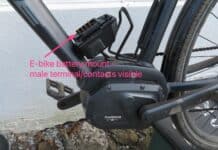 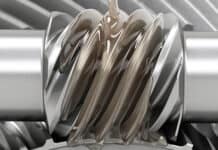 Not Recommended-Silicone grease use on electrical connectors 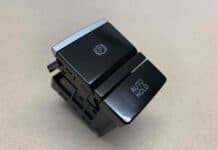 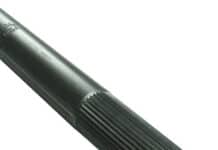 Choosing a lubricant for your brake component

ABOUT US
Newgate Simms are a private company, formed in 1978. A specialist supplier of synthetic lubricants and chemicals to a variety industry sectors. Sales/distribution and technical support operations are based in Europe. We can communicate in English, German and Polish
Contact us: support@newgatesimms.com
FOLLOW US
© Newgate Simms Limited 2021