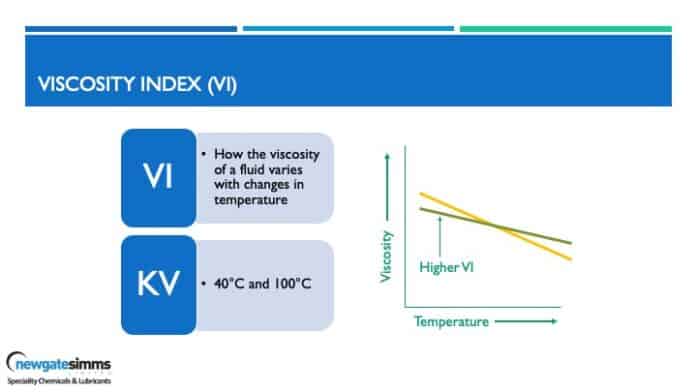 Viscosity Index (VI) is a data point reference used on our technical data sheets. The VI data point or scale was originally devised by the Society of Automotive Engineers (SAE) in the USA. VI is a unit-less number that gives an indication of how a lubricating oil (or base oil if used to create a grease) viscosity alters with temperature change. The lower the VI number, the more that the viscosity of an oil changes when temperature changes; conversely the higher the VI number, the less an oil will change in viscosity with temperature change. Originally the VI scale was only 0 to 100 but with advancements in chemistry and lubrication technology, the scale has increased. Considering VI’s via the graph opposite makes things easier to understand. The X and Y axis are logarithmic scales of viscosity and temperature, the orange line shows a higher VI as flatter line, the blue line is a lower VI. Some VI brackets of the base oils we use, including mineral oil to help the reader:

VI is normally only important if you are benchmarking one product against another and when considering the use of a grease, remember that VI only relates to the base oil used to make the grease, not the finished grease. Also, when we create a grease there is a possibility of using a VI modifier additive to help with improving a finished grease temperature stability.

What does Viscosity Index look like on a data sheet? Two examples Below:

Finally, if interested!….how is the seemingly arbitrary VI number generated? The Viscosity Index number is generated by an equation that involves using the kinematic viscosity of an oil at 40°C and 100°C. The equation used to determine VI is VI= 100((L-U)/(L-H)), where L is the oil having VI 0 at 40°C, U is a oil kinematic viscosity at 40°C, H is the oil having VI 100 at 40°C.

If you’ve read this far then we recommend two other associated articles on this website: